A Crash Course in Salsa

Except pause on four. Don’t even think of stepping on four.

Just wait for the music.

And do it again.

The intensity of rehearsals continues to astound me. For roughly three weeks, the cast has spent countless hours learning choreography that would make anyone exhausted simply by watching. This past week, the cast began learning salsa.

Salsa’s contagious rhythm brings a fresh upbeat sound to In the Heights. Besides making up the dance style for the club scene in the musical, salsa also reflects the culture present in Washington Heights, a Latin neighborhood in New York City.

Arranged by Puerto Rican choreographer, Waldo Gonzalez, the choreography was taught in a single rehearsal and perfected over the course of the week.

Some actors had a simpler time picking up the dance moves, others needed more than one run through. But by the end of the week, everyone was matching the beats and ready to start learn something new.

However, the club scene isn’t just the partner dance one might imagine when thinking about salsa. More complicated steps were scattered throughout the dance number — some even required a handful of dancers. The choreography combined the rhythm of salsa with the stories of In the Heights to create a club scene that highlighted the beauty of the dance and created an authentic narrative for the main characters. 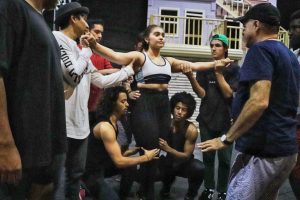 Acting and singing is really only part of the theater experience. As the choreographies have gradually been added into the mix, the storyline has become even more engaging and meaningful. For a musical teeming with Latin culture, it would truly be a crime to deprive the audiences of the trademark dances of Puerto Ricans and Dominicans.

Laredo Theater Guild International’s In the Heights brings us the equally versatile dance of salsa and its Caribbean beats. Watching the cast become engrossed in their choreographies reminded me of my own struggle learning salsa, but the actors were much more capable in picking up the dance than I was.

In the Heights has already created a refreshing sound with its score, but the dances have become an avenue to bring what many of us can consider familiar on to the big stage. Salsa is more than just a dance in this musical; watching the club scene is a seamless example of the story behind it all. The choreography demonstrates the fun of the nightlife, the tension between characters, and the emotion behind it all. 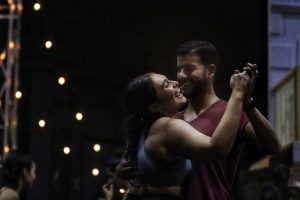